At the Department of Orthopedics and Rehabilitation at the University of Wisconsin School of Medicine and Public Health, our mission is to provide excellent patient care across all aspects of orthopedics and rehabilitation, delivered in a patient-centered, timely, and collegial manner utilizing innovative technology while promoting and advancing socially responsible medical education and research.

Our department consists of:

Our orthopedic program has been consistently ranked #1 in Wisconsin and in the top 50 hospitals in the United States by U.S. News & World Report, based on measures that include patient volume and outcomes, patient safety, nurse-to-patient ratio, and our reputation among other orthopedic specialists.

All of our providers, researchers, trainees and staff work together to ensure that you receive the highest quality of care.

In 1881, Edward A. Birge began teaching zoology courses to students at the University of Wisconsin which, combined with existing courses in botany, physics and chemistry, made up the early beginnings of medical learning.

In 1907, the Wisconsin state legislature passed a bill to establish a College of Medicine, renamed the School of Medicine two years later. Classes were held in the attic of historic Science hall and the old Chemical engineering building and included basic anatomy, physiology, physiological chemistry, pathology and pharmacology. Two decades later, 19 men and six women became the first graduates of the University of Wisconsin School of Medicine’s four-year program.

In 1919, the Mary Cornelia Bradley Hospital for the study of children’s diseases was built to care for children with orthopedic conditions and research childhood diseases. Dr. Harold Bradley and his wife donated $50,000 to construct the hospital in honor of their daughter, Mary Cornelia Bradley, who contracted spinal meningitis and pneumonia and died at the age of six. Additionally, Mr. And Mrs. Crane donated $25,000; with an additional $18,000 provided by legislature.

Rapid advances in orthopedic care and the need for a dedicated children’s hospital pushed the state legislature to approve $261,000 for a new facility. The Wisconsin Orthopedic Hospital for Children opened June 5, 1931 (later becoming the Children’s Hospital). There, doctors could provide medical, surgical and therapeutic treatment for children whose parents weren’t able to obtain treatment. The building, located on what’s now the west side of the UW campus, could hold around 110 patients; a kitchen, laundry and swimming pool were in the basement, with operating room and an x-ray suite on the third floor.

Common ailments in the 1930s and 40s included tuberculosis of the joints and bones, rheumatoid arthritis, bone tumors and congenital disorders; hip fractures and bunions were also treated. There were special outpatient clinics available for patients with cerebral palsy, scoliosis, or club foot. In the 1950s, the polio epidemic filled every bed and created a long waiting list for reconstructive surgeries and medical devices, such as braces.

Pioneers in Orthopedics and Rehabilitation 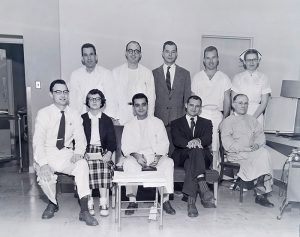 In 1920, two devoted physicians from Milwaukee, Dr. Frederick J. Gaenslen in orthopedics and Dr. G.V.I. Brown in plastics, agreed to come to Madison one day a week to initiate services and teaching in their specialties. Each was successful in building up an effective service and in training younger, competent trainees. 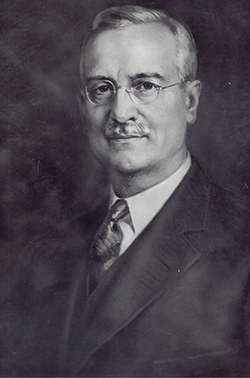 Frederick J. Gaenslen, MD served as the first chair of the orthopedic surgery department (1926–1933). Dr. Gaenslen earned a bachelor’s degree from the University of Wisconsin in 1899, completed his medical degree at Johns Hopkins (1903), spent three years at the German Hospital in New York, and repeated visits to active clinics in the United States and Europe. He joined the hospital staff as a part-time surgeon in the 1920s, traveling by train from his home in Milwaukee to Madison once a week to see patients. On his weekly trips to Madison, he would review cases with his younger associates in the evening and be up bright and early the next morning to start his work at the Bradley Hospital.

Throughout his career, Dr. Gaenslen contributed an extensive series of papers, some on new techniques, others on congenital malformations and essays on preventative medicine and physical therapy. He was one of the seven original founders of the American Academy of Orthopedic Surgeons in 1931.

We owe Dr. Gaenslen a debt of gratitude for training exceptional orthopedic surgeons throughout Wisconsin, particularly Dr. Robert E. Burns and Dr. Herman W. Wirka who have earned warm appreciation as his successors. 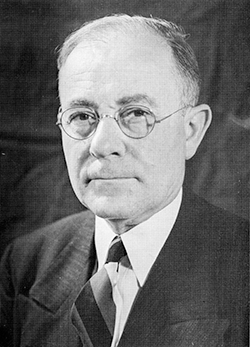 Dr. Gaenslen was succeeded by Robert E. Burns, MD, who led the department for 32 years (1933–1962). Dr. Burns earned his bachelor’s degree from the University of Wisconsin in 1917, writing a thesis titled, “The study of the Articular Capsule of the Knee Joint and Its Relation to Surrounding Structures.” He went on to complete his first two years of medical training here, and served as a part-time assistant in anatomy from 1915-1917. He completed his medical degree studies at the University of Pennsylvania in 1919. He went on to train for two years (1919-1921) at the Hospital for the Ruptured and Crippled (now Hospital for Special Surgery) in New York and completed a fellowship in orthopedic surgery at Mayo Clinic.

Following the passing of Dr. Gaenslen, Dr. Burns became the head of orthopedic surgery. He was known as a skillful surgeon and has trained many others successfully. To quote him: “Surgeons are made at the elbow of another surgeon.”

A paper by Dr. Burns on an osteoperiosteal chisel indicates one of his technical improvements to the field. A study of over 200 cases of osteomyelitis published in 1931 shows the importance of that disease at the time and reminds us that therapeutic agents now available have made infectious disease like this rare. 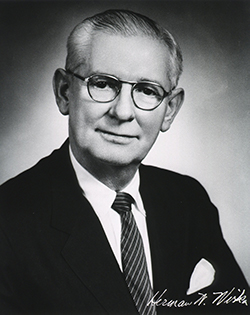 Another admirable successor to Dr. Gaenslen, who also trained closely to him, is Dr. Herman W. Wirka. Dr. Wirka served as the chairman of the Orthopedic Section at the University of Wisconsin from 1962-1971.

Dr. Wirka was born and raised in Madison, WI, and received his B.A. in 1928 from the University of Wisconsin. During his time at the University, Dr. Wirka assumed many roles with the Wisconsin Players, a non-profit professional entertainment company focused on Broadway-caliber productions, hands-on educational opportunities, and community service. At one point, it was unclear if he would choose medicine or the stage as his career path.

Indeed, he chose medicine, and received his M.D. in 1930 at the University. He became an assistant in orthopedic surgery and was a successful member of the hospital and Medical School.

Dr. Wirka was known as a dependable orthopedic surgeon who reduced fractures with skill, remedied poor joints, and straightened the backs of his patients. He was an admirable combination of humility, surgical skill, and deep interest in each patient. 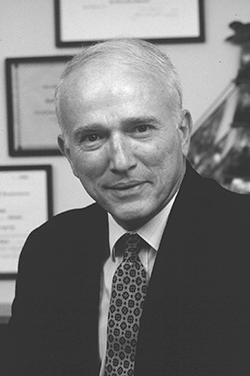 Dr. Andrew A McBeath served as the Frederick J. Gaenslen Professor and chair of orthopedic surgery from 1972-2000. He devoted more than three decades to the study of total joint reconstruction, focusing specifically on the hip and knee. Dr. McBeath contributed to the design of the Wisconsin Hip, a prosthesis that helped improve mobility and quality of life for thousands of Americans.

He developed an interest in joint replacement surgery early in his career and was one of the first surgeons in Wisconsin to perform a hip replacement. Four years after arriving at UW, Dr. McBeath was named acting chair, a title he would officially claim three years later and hold for a quarter century.

Under his gracious and capable direction, the division of orthopedic surgery grew considerably, branching into several new subspecialties. When McBeath began his tenure as chair, the division consisted of four members. Today, the department has 56 internationally-recognized faculty who specialize in a variety of areas. 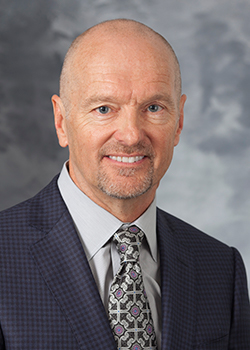 Dr. Thomas Zdeblick served as Chair of the Department of Orthopedics and Rehabilitation at the University of Wisconsin School of Medicine and Public Health from 2000-2022.

After receiving his bachelor’s degree from Marquette University, Dr. Zdeblick earned his medical degree from Tufts University Medical School in Boston, MA. Following medical school, he attended Case Western Reserve University, where he completed a research fellowship in microsurgery and his residency in orthopedic surgery. Dr. Zdeblick finished his training by completing a fellowship in spinal surgery at Johns Hopkins Hospital.

Dr. Zdeblick’s clinical practice focuses on the treatment of cervical, thoracic, and lumbar spinal conditions. His goal in patient care is to treat each individual in a customized manner, clearly explaining the condition, its symptoms and predictable course.

Founder and Director of the UW Spine Center since 1989, Dr. Zdeblick is a recognized thought leader in spinal surgery. Instrumental in designing novel implants to assist in the performance of less invasive spinal fusion or arthroplasty surgery, he has received numerous honors and awards, including:

Throughout his 22 years as department chair, Dr. Zdeblick advanced his goal of building excellence and distinction in clinical outcomes, translatable research, and graduate training programs within the department – resulting in local, regional, and national prominence.